They journeyed in silence for hours through southwest towns as they countdown to the end of their unending Northern trip. Alhaji Shehu, a businessman from Maiduguri was in the bus. He wore a skull cap and new dark brown kaftan to match, his wide grin exposed his silver-coated tooth as He sat next to the driver, being the middleman between the driver and Chukwuma the trader.

Alhaji was talking about the wealthy mass land and agricultural potentials of the North to all who cared to listen, his voice was the only disturbance between solitude and the slow-paced hip hop music blaring from the speakers. Ali took one glance at Alhaji and wondered how a man from the north like him would leave the west without any complaints. Alhaji had so much excitement and vigor in his voice as he kept on singing the praises of the Northern leader’s past.

The blaring speakers of Barikin Ladi reminded Ali that the day was Friday. He shouldn’t miss the Friday prayers for whatever reasons. The driver quickly turned to announce that the Muslims will like to pray when the bus came to a halt in a noisy marketplace. Ali hesitated for a while until a hand from the window tapped his shoulders.

‘’By Allah, the merciful. we should pray to him even in our sleep” uttered Alhaji Shehu. Ali got up and joined Alhaji as they walked towards the crowded mosque.

The unending journey to Kaduna seemed better after prayers to Ali as he walked back to the bus with Alahji Shehus, somehow he just felt better. ”everything is in Allah’s hands now” he said to himself.

The bus was more empty than he had left it earlier, Ali asked the conductor where everyone went to as he moved towards his seat.  ‘If u wan piss, make you go piss now o, no come use your own delay us again o’’ the stout Yoruba man replied.

With some sort of faith Ali’s courage was returning to him, he could not believe just some moments ago, He’s lost every joy of meeting his people. Eight hours already went but he still felt Lagos and its cruel life. He felt more relaxed at Kaduna, His father (Alhaji Goma) had briefed him many times about the big city, he arrived at a conclusion that seems to be a kind of self-compensation. By Allah, they will feel sorry for me “I’m a good musulmi, Hajiya knows I don’t tell lies’’ Ali muttered silently before finally leaving the empty bus which parked by the express road.

‘’Bia if u try to delay us again hia, we will leave you hia!’’ Chukwuma, screamed out as Ali alighted.

Ali could only be careful not to step on anyone’s toes, ‘’haba oogar, Make I no piss ne?’’ He managed to say as he walked into the bush to do his business.

‘’Every time you people will be acting anyhow! So, he want to say that he did not hear when the driver asked everyone to go ease himself okwiya? Chukwuma continued

‘’One serious accident happen for Ore last two weeks nobody, Nobody die o! na only 3 mallam die”, uttered the lady sitting directly behind Ali, trying to make a bad joke out of the tense air.

“Kei madam be careful I don’t want to enter this matter since morning, weytin happen naaa?” Alhaji Shehu sparked, as he turned to reply to the lady.

‘’Nonsense… rubbish. I was just joking na, why are you taking it so personal. You have been disturbing our peace with your gist since morning and nobody complained, why can’t you take a simple joke’’ the Lady retorted

‘’If you don’t want to hear what I am saying, close your eyes and sleep madam, what kind of joke is that?’’ Alhaji responded

‘’How do you want the young man to feel, he has been disturbed all day, let him be’’

An awkward silence enveloped the bus after Alhaji’s words, everyone holding back to their thoughts with no one ready to ignite any argument again.

Peeeeep! Peeeeep!! The driver blasted his horns to remind Ali he is the only person yet to get into the bus. 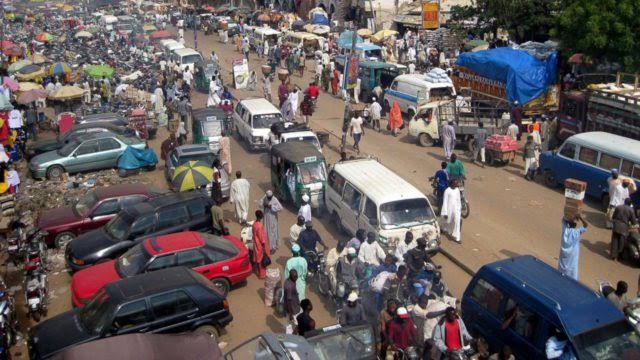 He must have been urinating for over 5 minutes, lost in his thoughts… he was done but he just stood there, thinking out loud.

They have been having a go at me all day, why bother over a few minutes, he was sure they can take it all so why rush?

Ali stepped into the bus, neglecting everyone’s whims and whispers. Whatever they have to say about him is not important…. It’s not even relevant!

The Hajia and her friend sitting next to Ali, moved their legs to accommodate Ali’s movement into his preferred seat. He was barely sited before the driver zoomed off. Forcing Ali to land his butt on the once fleshed-now semi wooden chair.

‘’Haba driver, you no go allow me sit down? You want to kill me?’’ Ali shouted

‘’Yes… he wants to kill you’’, Chukwuma responded yet again

‘’Omo ibo, leave this man alone na. ewo ni tie? Wetin be your own with him wahala’’ the conductor replied, ‘’Abeg make we deh go in peace, e don do’’ He added.

Like a refreshed form of energy welled up in him, Ali resurfaced! Lashing out at Chukwuma to the surprise of all in the bus

“will you muruv you dirty finger off my face, nna lekwanu obele nka!” Chukwuma slapped his finger off his face, Ali angrily reached for his bag, but to no avail…

“I’ll beat you, you family no go know you again” Chukwuma joked

‘’What I can do with this life now Mallam? All I have yunwa ne ke ji. All the fuud I eat don disappeared, only 200naira I haff in my wallet, mai ne ne zan chi?’’

Alhaji Shehu sympathized with Ali, urging him to ignore everyone, Ali calmly sat and decided not to get involved in any form of discussions with the passengers.

The Driver pulled up at another busy junction beside a long queue of buses, it was a famous arena for travelers as restaurants lined up on the highway for passengers to get food before continuing the final lap of the journey.

One by one they all came down from the vehicle, moving towards restaurants of choice to get refreshed but Ali stayed back. These restaurants don’t look like they have the menu for heartbroken individuals with N200 left to spend he thought to himself.

A couple of minutes went by and the Hajiya sited next to Ali came into the vehicle with two plates of food. Ali watched as she came in, sat next to him and offered him a plate.

His home training made him reject her offer, but his stomach was not in accordance. He was very hungry, and that meal will go a long way in satisfying him, but he had to reject her initial offer and hoped she will impose so he can gladly accept.

Fortunately for him, Hajiya persisted, she urged him to take the food, ‘’ I bought it for you mallam, come on, i know you are hungry and can’t afford a proper meal now, it’s the least I can do, please take it’’ she said.

‘’Nagode Hajiya’’ Ali responded almost immediately as he stretched his hands to receive the meal.

Ali took a couple of spoonsful of the jollof rice and fried plantain before saying thanks again, appreciating her for coming to his aid.  Hajiya watched as Ali devoured his meal hurriedly, she nursed a thought as he ate and when he was done eating, she faced him and said ‘’I have something else for you if you are interested.’’

It was all fun, glitz, and glamour at the Cellulant inaugural partner’s summit Awards &Gala night. The Awards & Gala night […]